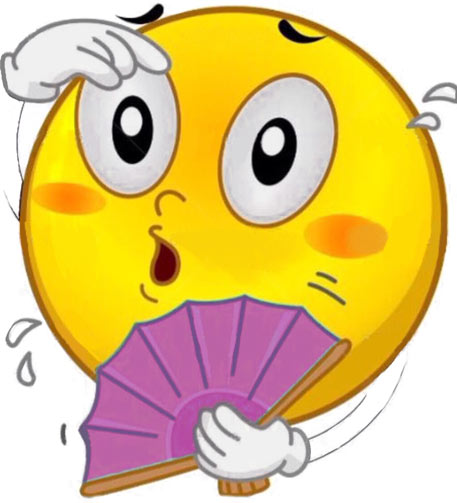 When you reach 50, it seems that everything is conspiring to get you fat:

It makes you feel as though you’ve reached the end of the road as far as losing weight is concerned.

Is losing weight after 50 possible?

If you’re like lots of other women in the over 50 age bracket, you may be tempted to listen to those that say it isn’t possible to lose weight after 50.

And why not? It would be easy to say, it’s just not possible and carry on enjoying extra helpings guilt free. But, and I’m living proof, the truth is that it is just as possible to lose weight when you’re 50+ as it is in your twenties and thirties.

So you get hot flushes (or hot flashes as the Americans call them) and your brain goes foggy. How does this affect weight loss? Well in my experience, the hot flushes can actually help your weight loss efforts (a tiny bit anyway). Because, when you have a hot flush or night sweats, your body temperature rises. And when your body has to work to change your body temperature, either up or down, it uses up energy. The result is that you burn a few more calories! This is good news if you’re trying to lose weight and you’re over 50 or in the menopause or peri menopause.

I definitely noticed that when I hit my late forties and then the big 50, my metabolism slowed down. While it did take almost a year before I saw a difference,  I found a way to speed up my metabolism. And I now benefit from a metabolism which I think is equal to how it was ten years ago. Here’s how I did it:

I walk a lot, and I walk briskly every day. Four months after I turned fifty, I got a Fitbit and was shocked to see that I only averaged about 3000 steps a day. So, I increased it, gradually at first and then, the more I did, the more addicted I became. To the point that a year after I got my Fitbit, I completed the MoonWalk. The walk is a full Marathon, 26.3 miles (over 50,000 fitbit steps!) around London overnight and quite a challenge. Okay, so that was my peak, but I haven’t stopped walking and now easily average the recommended 10,000 steps a day.

Once a week I go to a Pilates class and some times double up with a Kettlebells class too.

The effect over time is really noticeable, I’m stronger, more energetic and most importantly, I can eat more without putting weight on. Even on the few days when I laze around and do very little. That’s because I now have a faster metabolism.

I did notice a drop in my energy levels and made losing weight after 50 hard at first.

But, two things really helped me, the first, I’ve already mentioned and that’s the walking. My Fitbit is set to remind me if I’m still for too long. I have this set for 12 hours of every day and not only does it help me get to my step goal, amazingly it boosts my overall energy levels. The second thing I did was to start taking a multi vitamin designed for the 50+ woman. It took two weeks before I noticed a difference, in energy – and brain fog too.

Losing weight after 50 – Do you have to starve?

Honestly, no. Well maybe you might feel like you are, at least a little a bit, at the very start. At any age though, dieting is tough, so I’m not going to tell you that losing weight after 50 is a piece of cake (excuse the pun). But, if you plan it right, you’ll know what to expect. And, while you build up your activity, which should help speed up your metabolism, either choose to eat a bit less or lose a little bit slower.

How to make losing weight after 50 work for you

Play with our planning calculator to see what I mean, it’ll work out your finish date based on your age, how hard you want to diet and how much exercise you want to do.

It really is possible and you will feel great. You’ll be able to show your arms when it’s hot (or during a hot flush) without caring and you’ll be able to wear clothes you never thought you would again.

Help keep us FREE, Share This Page with your Friends!

About the Author: Anni

Editor in Chief - Nutrition and weight loss writer and veteran. Specialising in real life applications and reviews. Anni, has lost over 55lbs in weight and admits it’s been a life long struggle. Now at 50 +, she's sharing what she's learnt along the way.

All free and all in one place!

Not only that, our weight loss planner factors in how your metabolism really works to predict how long it’ll take to reach a particular weight loss goal.

From the Atkins diet to the South Beach diet and from low carb to low fat diets, you’ll find them here.

Check out the differences between the diet types and find out what we think works.

I’m Anni, I’ve lost over 55lbs in weight and admit it’s been a life long struggle. Now at 50 +, I’m sharing what I’ve learned along the way.

Read my weight loss blog for tips, tricks and insights into staying motivated on the weight loss journey.